Many of the U.S. military bases in Japan hold open days of some kind or another. With visitors generally consuming vast numbers of hamburgers and hotdogs. Plus perhaps having a quick look around a fighter jet or two.

The so called “American Fest” at Okinawa’s Kadena airbase yesterday was no different. Except that (perhaps to celebrate the expiration of the 1994 assault weapon ban), young children were allowed to play with helicopter machine guns. 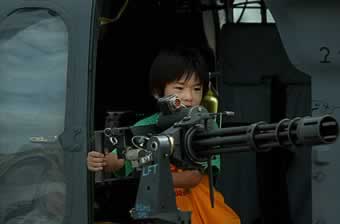