Kohei Shibata, a 24-year-old male, was arrested for fraud last week after attempting to pass himself off as a young flight attendant.

It seems Shibata trawled numerous internet personal sites, pretending to be a 23-year-old female flight attendant called Mizuki Shibata (he obviously couldn’t resist keeping his own family name). This wasn’t just an online scam though. Young Shibata even went so far as mimicking a woman’s voice when he spoke to some of the men he had built relationships with through the sites and in e-mails. Plus he also sent pictures cut from magazines that he claimed were the attractive Ms. Shibata.

After managing to form a particularly promising relationship with a 31-year-old Tokyoite, Shibata-san sent a message saying that he (or should that be she?) had been taken sick and desperately needed a loan to pay for the operation.

Sound suspicious? Too right it does. Yet unbelievably the love-struck victim fell for this and made 6 bank transfers, totaling a whopping 8.2 million yen (40,000 pounds).

Presumably he was hoping for a blissful future with someone like this. 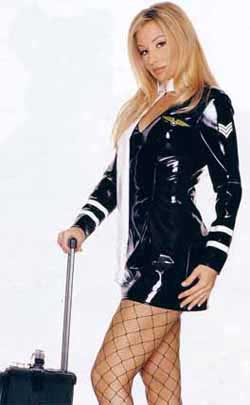