Having seen his England teammate David Beckham make a fortune in Japan advertising everything from chocolate to sunglasses, Liverpool striker Michael Owen has decided to get in on the money making action.

But whereas everything Beckham does is considered cool, Owen might not find things quite so easy. As for reasons unknown (although most likely financial), he has opted to lend his name to the Aoyama brand. A company well known for providing cheap and not especially fashionable suits. 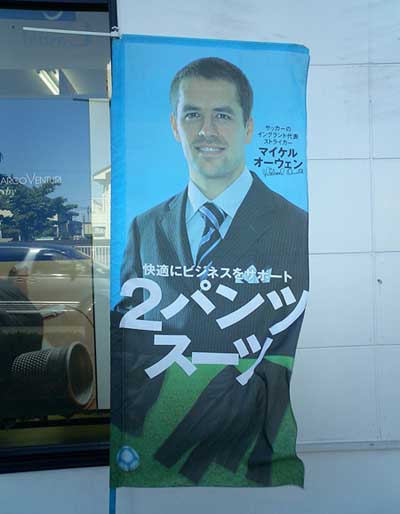 Is that embarrassed smile due to feelings of guilt associated with the huge amount of money he is being paid, or because of the knowledge that this picture of him in an ill-fitting and cheap suit is going to be seen all over Japan?

I’m going with the latter.