Saturday marked the opening weekend of the J-League, and even though I’ve been to quite a few matches in Japan, the fans behaviour is a constant source of amusement/interest.

The first noticeable thing is the large number of females and families in the crowd. Which I have to say isn’t a bad thing. On the contrary, it’s good that anybody can go to watch a game without the fear of trouble, or violence. The down side is that whilst enthusiastic, the crowd lacks a certain amount of passion. It’s just all very civil. A little too much for my liking.

After one set of fans sing a song, the opposing fans politely applaud their efforts. I’m not joking.

When there is some cheering or singing that’s considered inappropriate, or an incident on the pitch that isn’t to the fans liking, they boo. All good up to now. But whilst booing, everybody (and I mean everybody) adopts the thumbs-down gesture. This is all well and good when you are 5 years old, but not at a football match when the referee has made a diabolical decision against your team. There are numerous expressive hand gestures, and a quick thumbs-down isn’t the one I’d pick.

And finally, there are a distinct lack of lunatics in the crowd. Every sporting event needs a deranged fan spouting nonsense for the duration of the game, but up to now I’ve never seen one at a Japanese football game. Maybe I should get the ball rolling!

But it’s not all bad. There are some decent sized crowds, and the stadiums are excellent. 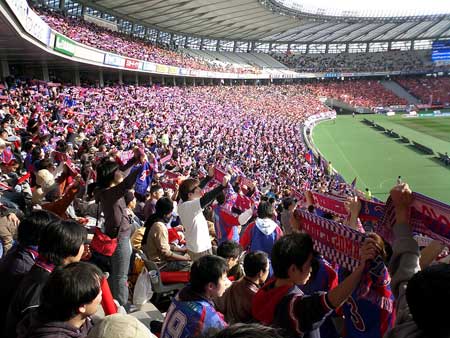 And whilst the songs and chants are somewhat regimented, everyone seems to know them. You can’t beat a few thousand people singing at a football match. For reasons unknown, FC Tokyo supporters always sing you’ll never walk alone before the game, which is particularly impressive. Scarves are held aloft too, just like at Anfield. 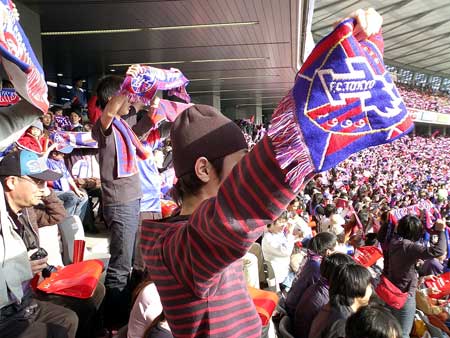 Although this young woman didn’t know the words, so she attempted to nonchalantly read the words from her strategically placed lyric sheet. 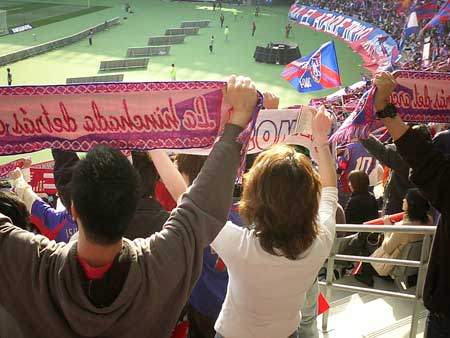 And last but by no means least, beer is readily available whichever way you turn. Buy it from the numerous beer stalls if you want, or if you can’t be bothered getting up, call over one of the young beer ladies. For obvious reasons, the latter option is the most popular. You don’t miss any of the game, and you get the chance to ogle strike up a conversation with the attracti football savvy vendor. 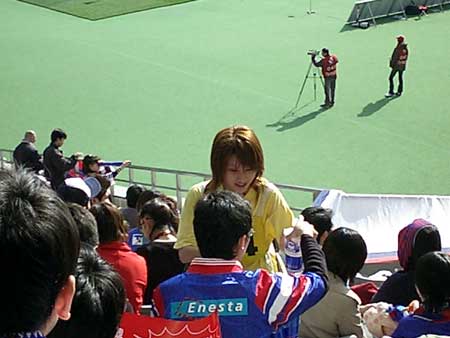