When it comes to big sporting events involving Japanese teams, there is generally a distinct lack of passion — at least of the genuinely felt and involuntary variety. Too often, anything approaching real fervor appears heavily orchestrated, and is only apparent on the day of the game itself. Or at the most a day or two before. 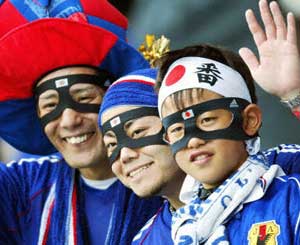 Thankfully though there are exceptions, and 28-year-old Satoshi Ochiai is a prime — if not exactly ideal — example. The football (soccer) fanatic recently boasting, â€œI broke up with my girlfriend to save on expenses as most of my savings and salary go on traveling abroad to watch Japan play.â€

Yet the spurning of a young lady is only one incident among many that prove the company employee’s dedication to the sport. For Wednesday’s World Cup qualifier against bitter rival North Korea, Ochiai-san is traveling to Bangkok to see the game. A trip that admittedly doesn’t sound especially extreme, but it is when you consider that the match is being played at a neutral venue and behind closed doors; a move prompted by crowd trouble amongst North Korean fans at a previous game.

The fact that no supporters are allowed into the stadium however is only a minor hindrance to the original Ochiai. The resourceful chap has booked a hotel room near the stadium; allowing him to watch the game through a telescope from the balcony.

Real passion for sure. With, it has to be said, the addition of a fair bit of fanaticism.