When Eri Furuse held a news conference last month to announce the start of her commercial broadcasting career in Tokyo, more than 100 eager reporters and photographers turned up. But most (or mostly likely all) of them weren’t there to listen to any pearls of wisdom Furuse-san might utter. No, the press was there for the sole purpose of catching a glimpse of the young presenters famous attributes. Namely her (alleged) 95 cm breasts.

It would seem that Ms. Furuse’s broadcasting ability is irrelevant, as all the media interest she is generating (and there’s been an awful lot of it) focuses entirely on her melon like mammaries. And don’t for a minute think I’m indulging in a bit of schoolboy fun here by likening her breasts to the large and spherical fruit. As Furuse-san’s nickname is Suikappu. A rather amusing play on words combining suika (water melon), and kappu (cup).

Up until her recent move to Tokyo, Suikappu had been working quietly as an announcer in rural Yamagata Prefecture. Although she did briefly make the news last summer when rumours surfaced of a former soccer team coach dating a â€œlarge-chested NHK announcer.â€ But that spot of media exposure was nothing compared to what she is experiencing now.

The media’s obsession with her melon like breasts has angered Furuse. Not only has she asked not to be referred to as Suikappu, but she even had the gall to turn up at the press conference wearing a bulky white outfit. Completely covering her famous assets. A move that did not go down well with the hordes of fruit loving photographers.

Her actions also garnered criticism from Yuichi Hirabayashi, a show-biz reporter who coined the name Suikappu in the first place. He said that, â€œI thought up the name considering that Obanazawa [the city in Yamagata where Furuse was born] is famous for its water melons. It’s arrogant of her to reject this term of endearment.â€ And if that wasn’t enough, he went on to say that, â€œMs. Furuse should actively employ her suikappuâ€ 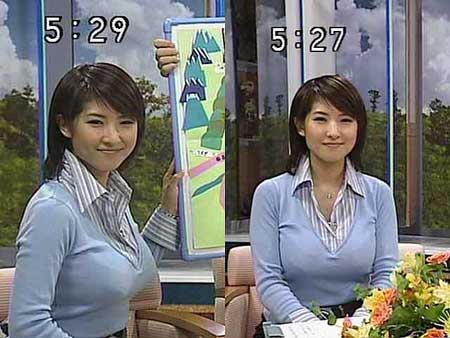 You could almost say they look good enough to eat. But I won’t.