Maybe it was due to the euphoria of Japan winning the inaugural World Baseball Classic, or alternatively the simple pleasure of bagging a freebie, but whatever the reason, several women were injured in a melee on Tuesday surrounding the handing out of Extra newspaper editions marking the nation’s against-the-odds sporting triumph. 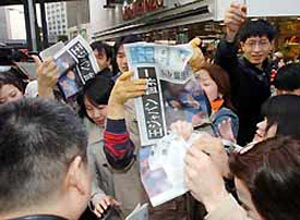 The unfortunate ladies were ignominiously pushed against a concrete flower box and then to the ground as a throng of 50-60 people rushed at newspaper employees in possession of the Extras. A fortune-teller whose stall is situated nearby said the mob swarmed around the distributors, fought over the copies available, and shouted, “Cut it out,” “Ouch” and “Stop pushing.”

Whilst nobody was arrested over the incident, the police are allegedly still questioning the fortune-teller in regards to why, having obviously ‘seen’ the incident coming, he hadn’t done anything to prevent it.