For the past several years, annual suicides in Japan have exceeded the 30,000 mark. A frighteningly high figure, and one that the authorities are painfully aware of; but at the same time appear unable to reduce.

Now while not all of these unfortunate souls choose Aokigahara forest (or Sea of Trees) as the place to end their lives, a disturbingly large number do — usually somewhere between 50 to 100 people each year. The forest itself perhaps unexpectedly located at the foot of Japan’s most identifiable icon: the famous and fabulously beautiful Mount Fuji.

Whether this closeness to Fuji has any bearing on its ‘popularity’ isn’t clear, but the forest’s dense nature makes it ideal for those who really don’t want to be found. Providing the perfect location for them to fade away in a private and decidedly quiet manner. 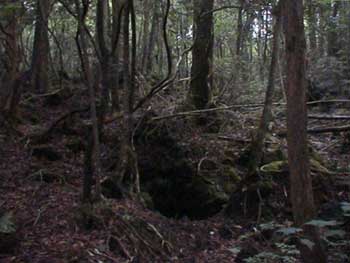 This infamous aspect of Aokigahara means that recovery teams are regularly dispatched to comb the area for bodies, hoping to identify those that they find; allowing any next of kin an element of closure. According to Spa! magazine however, other, more unsavoury types might be getting there before them: grisly scavengers scouring the forest, hoping to find credit cards, valuables, and cold hard cash.

Yet not content with such hearsay, a reporter from the magazine claims to have taken it upon himself to explore the area, supposedly returning with a bounty that included several credit cards, a few valid rail passes, and perhaps more surprisingly, some commemorative coins. 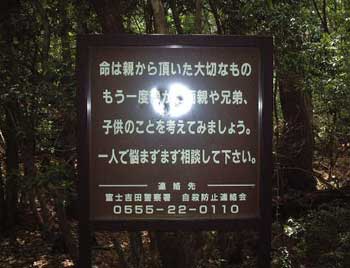 Yet this relatively easy (if ghoulish) sounding path to prosperity is countered somewhat by Ryo Kurihara, the author of a book related to Aokigahara. Kurihara-san claims such spoils aren’t so easy to come by, and a successful trip involves considerably more that just turning up and aimlessly ambling around:

“I’ve used a handheld GPS, transceivers, goods employing the latest scientific technology and loads of people helping me and managed to find 40 bodies in the forest. However, the largest amount of cash I’ve ever found on one has been 90,000 yen [450 pound]. I’ve also found some driver’s licenses, but most of them have been ruined by being exposed to the elements for so long, and it’d be risky to try and sell those ones that aren’t damaged. I’ve also found cards and other forms of ID.â€

Not an insubstantial haul by any means, but hardly worth the considerable effort and cost. Plus lugging around such a large number of bodies could slow down proceedings considerably, creating all kinds of logistical problems. Yet despite Kurihara’s obvious experience in this area, rumours amongst locals tell of passing truck drivers stopping on their way through, boosting their salaries with a few festering finds. A practice that, if true, is a decidedly macabre take on the old maxim, ‘first come, first served’.

*Life is a gift you were given by your parents. Please think about them, the rest of your family, and any children you have. You don’t have to suffer by yourself, please give us a call (the Fuji Yoshida police counseling service) and talk to us.