Not wanting to miss out on all the hullabaloo surrounding the birth of Prince Hisahito, Japanese jewellery giant Ginza Tanaka has created a commemorative gift; however in keeping with the company’s elaborate and hugely expensive ‘special editions’, it’s a sumptuously shiny 24-karat gold rocking horse. 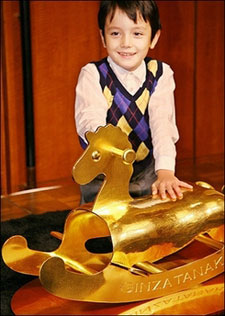 Weighing in at 30 kilogrammes and retailing at a rattlingly royal 150 million yen (677,000 pound)*, the ‘toy’ is currently a one-off, although there is an option of producing more depending on orders, with a spokeswoman saying, “Due to the costliness of this pony, we haven’t received an order yet, although we have received inquiries.”

Yet for any parents looking for something that little bit special for their offspring, and more concerned with fun than finance, it was also confirmed that, â€œits seat is very smooth and easy to sit on. The child can sit on it for long hours without getting tired.”

A fact sure to substantially boost sales.

*Grinning child dressed like a middle-aged golfer not included.