With today being the middle of O-bon (Japan’s short and sweet summer holiday), huge numbers of people are now either packed in popular tourists spots or trundling along in traffic jams, as millions of Japanese almost en masse try to cram in as much as possible before the worries of work once again wash over them come Monday morning.

All in all a rather sorry state of affairs that invariably results in a huge increase in accidents, with so many people intent on getting away somewhere and having a good time. A trail of destruction that as well as being covered by the press, is also meticulously monitored by the police — each station somewhat morbidly displaying the accident/death toll of the previous day.

As it happens, this particular part of Tokyo suffered only a measly two accidents and no deaths on Monday, with the capital as a whole not doing quite so well, although it also managed to avoid any fatalities. 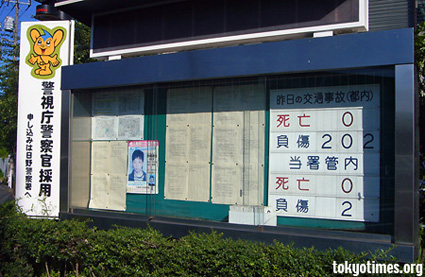 Figures that perhaps due to so many people migrating away from the metropolis aren’t as bad as they sometimes are. 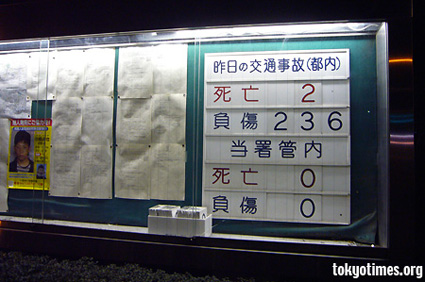 Not that I regularly take photographic evidence of them you understand.

Just now and again that’s all.