Maybe it’s because of his pioneering promotion of PVC hot pants, or alternatively his tireless campaign against long-standing stereotypes; but either way, television celebrity Hard Gay has at last got some public recognition after being chosen as this year’s â€œMost Topical Figureâ€.

Not one to openly court publicity, the introverted and reserved star was nevertheless pictured as he was introduced to both the audience and Environment Minister Yuriko Koike prior to receiving the award. 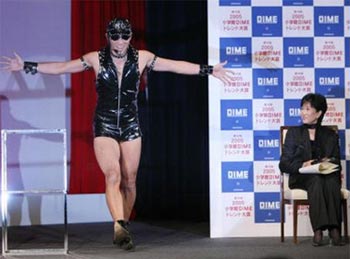 Update: Whilst nominees and the voting procedure are heavily guarded secrets, it has been rumoured that ‘the construction worker’ from 1970’s beat combo The Village People amassed the same number of votes as Hard Gay. The TV personality allegedly only getting the nod after a flurry of backroom activity and clandestine deal making.