A man in western Tokyo is currently under police investigation due to his unusual living arrangements, the 57-year-old sharing his home with a staggering ten women. Yet despite all the ladies being in their 20s and 30s, officials have stressed that Hirohito Shibuya is not being pushed to divulge his phenomenal pulling power. Rather, they are looking into a claim that one woman was told not to spill the beans about the situation after she refused an invitation to join, Shibuya-san allegedly threatening her by saying, â€œYou will be in danger if you tell this to anybodyâ€. 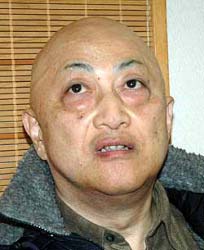 The group’s unusual set-up started in February 2000, when Shibuya divorced his wife and started living with several women. An incident he has never looked back from, as after a few more marriages and divorces he has continued to increase his number of partners, the majority of those who have divorced him opting to stay on at the house — most of them also choosing to retain his family name.

In a residential area where curtains must be continually twitching, neighbours maintain that shifty Shibuya stays at home every day, whereas the young women go out each morning — presumably to work. Although this is not to say that the 57-year-old is nothing but a lazy ladies man, as he claims to practice fortune-telling from the house. A profession that appears to have played a major role in creating this unconventional situation in the first place, the middle-aged mystic telling investigators that, “After starting fortune-telling at home, female clients have gathered around me, and now we lead a communal life, just like polygamy”.

Shibuya further added to his mystique — whilst at the same time hinting at a secret that could net him a fortune — by saying, “I realised that I can attract women by reciting a charm”.

A statement that going off appearances could well be true.

*Update: It has since been reported that during a search of the house investigators found a stun gun and tear gas spray, suggesting that Shibuya-san backed his charms and captivating good looks with rather more forceful measures.