In an incident that will do little to enhance the police’s reputation, a 55-year-old senior officer managed to shoot himself in the arm on Monday morning, bringing about an unexpected climax to a presumably less than eventful night shift.

Perhaps tired after a long stint at work, or bored witless from sitting in the police box all night, the unnamed officer appears to have been playing with his gun — the safety catch inexplicably unlocked. Now whether he was battling imaginary yakuza or reliving his favorite movie moments wasn’t disclosed, but the clumsy cop somehow managed to accidentally fire a shot that went through his arm; the bullet luckily continuing on through the window and coming to a halt in a nearby wall, instead of pinging around the room in a semi-comedic fashion. 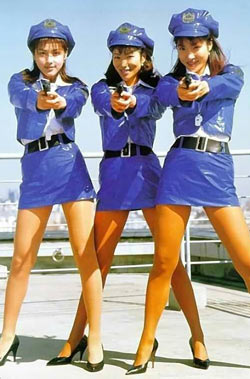 some other gun wielding officers yesterday

Nobody else was injured in the incident, including a surprised sergeant who was also present, but after violating in-house regulations concerning guns and safety catches, the injured officer would seem to be in an awful lot of trouble. A situation that an uncompromising statement from the Takamatsu Kita Police Station appears to confirm, the powers that be hinting at a severe reprimand by saying, â€œOfficers must be more careful in handling their guns.â€