On this site I’ve mentioned Haruurara before. The racehorse with a record now standing at an unenviable 113 starts and no wins.

Thousand have turned out to watch the horse’s lame attempts at securing a victory, and at the same time (somewhat predictably) snapped up much sought after Haruurara merchandise. One company even made a bra modeled on the hapless horse.

But the enterprising souls at Kochi Race Track have gone one step further and opened a Haruurara gallery. Rather imaginatively (or not as the case may be) named Haruurara In-The-Movie Gallery. Visitors will have the chance to see numerous photos, and it goes without saying, the opportunity to load up on Haruurara memorabilia. Yet perhaps the highlight of the exhibition is a real-life model of the hopeless horse itself.

But with 113 races (and counting) without a win, how long will it be before the real (and stuffed) Haruurara becomes the galley’s biggest attraction? It’s going to happen, I just know it. And lets be honest, it’s got to be better than Haruurara Glue! 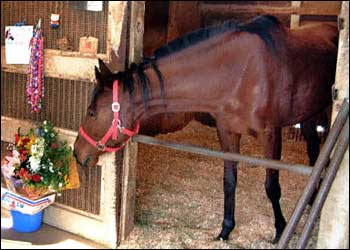