A Japanese construction worker was arrested on Tuesday for underwear theft, with police finding a humongous haul of 4,400 pieces of women’s undergarments in the 54-year-old’s Hiroshima apartment. 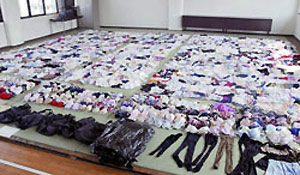 Panty pervert Shigeo Kodama’s capture came after being rumbled for stealing a measly six items of underclothing from two homes in February; however during questioning he inadvertently gave away his powers of panty pilfering by boasting — in reference to his work on tall buildings — that, â€œI’m very good at climbing to high places.â€

How good Kodama-san is at climbing high prison walls on the other hand remains to be seen.