A wild boar was killed on Saturday after making the mistake of visiting a town in Hyogo Prefecture.

The 100-kilogram animal was first spotted in a local park in Nishinomiya, but after disappearing it later resurfaced near a bus terminal. Now obviously having a wild boar running amok around town is not ideal, so 12 police officers and 3 members of a nearby hunting club were called out to rid the town of its unwanted guest.

The thing is their approach to catching/killing the animal was primitive to say the least. As after managing to corner the boar near an apartment complex, they proceeded to hit it with a piece of wood in an attempt to knock it unconscious.

Unsurprisingly the hit-it-with-a-stick-and-hope-for-the-best approach failed miserably, so after cornering the beast a second time, the group of hunters and policemen threw a net over the animal. An idea that was not only much more sensible, but also successful.

Yet despite catching the boar with a more modern and thoughtful approach, the men quickly reverted back to basics and killed the captured beast by spearing it to death.

One of the hunters justified this by saying, “It posed a danger to people in the city. It was big and capturing it alive was extremely dangerous.”

Maybe so, but did they have to spear the poor animal to death? 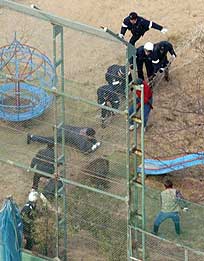 I’m not sure at what point in the chase this picture was taken, but presumably sticks and spears were involved.