Yesterday I did some teaching at a kindergarten. Well, I use the word teaching rather loosely. In reality, 70 or so 5 year-olds ran around making lots of noise, whilst I stood there looking bemused, shouting out random English words. It was good fun though.

But one thing struck me. As it always does. How do these cheery and inquisitive little boys turn into rather dour (and decidedly uninquisitive) salary men? It seems such a shame that a large number of these kids will turn into suit wearing drones, working every hour god sends, and having precious little time with their own children.

But maybe, just maybe, being a salary man isn’t such a bad thing. It could actually be my western thinking that’s out of place. As in class at the junior high school the other day, the students were talking about their dreams. Sadly for a group of 14 year-olds there were very few responses, but one boy stood up and proudly proclaimed that his dream was to become a salary man. To give him some credit, there was a slight edge to his answer. He didn’t want to be any old salary man, his aim was to become a great salary man.

I couldn’t think of a response then. And I still can’t think of one now. So here’s a picture of his future to pass the time along. 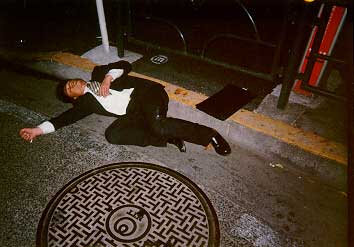