Conversations in Tokyo this weekend may well touch on the birth of a male heir to the Chrysanthemum Throne, along with the upcoming selection of a new Prime Minister; however for most people, riding high at the top of their ‘to talk about list’ will undoubtedly be the results of this year’s hugely prestigious and much coveted Best Jeanist and Nicest Hair awards.

In a decision that sent shockwaves through the nation’s schools and offices, top denim wearer of the last three years, Ayumi Hamasaki, was finally ousted, with Olympic gold medal winning figure skater Shizuka Arakawa gracefully walking away with the Best Jeanist award. A result that many are already claiming trumps her Torino triumph by a considerable margin.

Also on the podium were singers Kumi Koda and Kazuya Kamenashi, the former pictured below, having inexplicably lost her jeans for that all-important promotional shot. 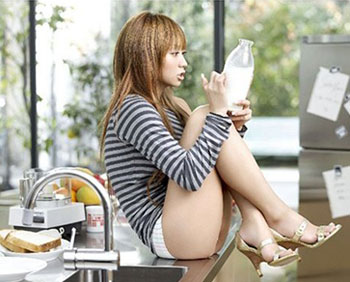 Similarly compelling was the contest for hair honours, with actress Chiaki Kuriyama bagging her first Beauty Week award. The Kill Bill Vol. 1 star emotionally confessing, “There used to be a lot of times when I just wanted to lop it all off, but I’m really glad I’ve kept my long hair.” The image below clearly confirming Kuriyama’s comment, with her long and lovely locks on prominent display. 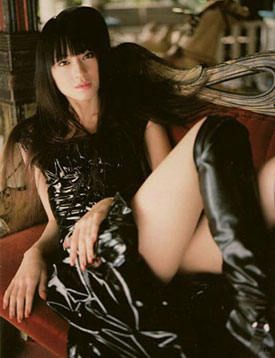 Fellow actress Masami Nagasawa was also presented with an award for her handsome hair, prompting the 19-year-old to prove the incredible importance of such events by pithily proclaiming, “This has really made me pleased that I’m a girl.”