Whether it really matters or not is obviously open to question, but the issue of size — and a supposed lack of it — sometimes rears its head in relation to the Japanese, with the country’s rather inadequately proportioned apartments and pioneering products such as the Walkman only adding to the argument.

Yet not everything one hears is true — far from it in fact.

The length and breadth of Japan’s numerous shopping malls for example can in no way be contested, plus relatively recently, Tokyo has seen the construction of several sizeable erections, the latest standing proud as the capital’s largest. And in regards to more personal matters it’s a similarly successful story, as the young fella featured below is happy to flaunt his unfeasibly large chopper. 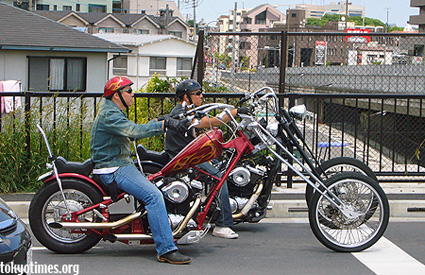