There are classic cars, classic films, and even classic video games. Now, perhaps rather surprisingly, we can tentatively add underwear to the list; as after going out of fashion decades ago — and only kept alive by old men — the humble loincloth (fundoshi) is set to make a bottom baring comeback.

This most traditional of undergarments is now being sold in decidedly untraditional tartan and paisley patterns. Plus it’s also available in a wide range of colours and materials. Including silk for the more adventurous and extravagant fundoshi fan. 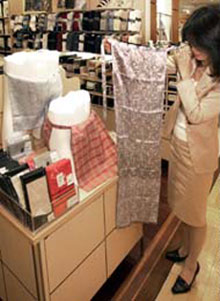 The expensive Mitsukoshi department store coined the term classic pants around 10 years ago, but it’s only recently that sales have started to take off. Pensioners may still be regular customers, but now young ladies are also joining them. Men’s clothing section manager Yoshimi Shuma claiming, â€œWomen seem to be buying them for their boyfriends.â€ Yet salary men are also jumping on the fundoshi bandwagon, with many purchases made when good results are needed at work. The lowly loincloth being upgraded to power underwear. I kid you not. 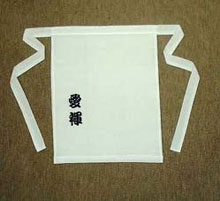 Loincloth expert and author of â€œTales of Fundoshiâ€, Masatoki Minami, claims that the garment’s connection to militarism hastened its fall from grace. Yet western prudishness may also have played a part. Many foreign dignitaries that arrived in Japan during the Meiji Era (1868-1912) were appalled by the numerous labourers dressed only in their underwear. Complaining that the sight of barely concealed buttocks was far from appropriate.

All that’s in the past though, and it goes without saying that Minami-san is ecstatic about the revival of his favourite underwear; proudly claiming that, â€œsome people consider the fundoshi to be cool.â€ The loincloth lover excitedly adding, â€œJapanese culture remains alive in that metre of cloth.â€

Which, if true, means that it’s only a matter of time before Hello Kitty loincloths hit the stores.