After years of secrecy and clandestine meetings, the Zenkoku Teishu Kanpaku Kyokai (National Male Chauvinists Association) has finally gone public. A spokesman for the group claiming the decision was prompted by the rising number of marriage break-ups amongst older Japanese. The self-proclaimed chauvinist proudly boasting, â€œWe want to prevent more middle-aged divorces.â€

The association currently only has ten members, but over the years it has produced several books that include recollections of spiteful and ill-tempered marital spats. This uncompromising approach being similarly evident during the group’s first ever open meeting on Saturday. One speaker boldly pinning his colours to the mast by acerbically claiming, “There are only two types of men. Men who are hen-pecked, and men who are going to be hen-pecked.” 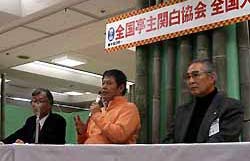 Whether such statements helped boost membership size wasn’t disclosed, but the mood was lightened somewhat by an award ceremony. One chap even bagging a Level Two ranking in the Way of the Chauvinist; receiving this most prestigious of prizes after recounting a feisty fracas with his wife, and how he unexpectedly flinched when she threw a chair at him.

Yet despite such obvious distinction, the accolade was tinged with an element of regret, as its recipient fell just short of an unprecedented top-level award. A fact confirmed by a fellow association member’s rather rueful comment of, “He would have got an even higher grade if he hadn’t flinched.”