During a debate in 1860 between the Anglican Archbishop of Oxford University, Samuel Wilberforce, and evolutionist and agnostic Thomas Huxley, the latter asserted that given sufficient time, all the possible combinations of matter (including those necessary to produce a man), would eventually occur by random chance.

This exchange prompted Huxley to famously ask Wilberforce for the services of 6 monkeys that would live forever, and 6 typewriters that would never wear out. Arguing that given an infinite amount of time, the monkeys would eventually type the complete works of Shakespeare. Rumour also has it that Wilberforce, a skilled mathematician, was forced to concede the truth of Huxley’s point and lose the debate as a result.

Now as Monkeys are somewhat unpredictable, and typewriters are quickly becoming a thing of the past, I’d like to give Huxley’s theory a more modern touch. So I declare that given an infinite number of Japanese people, and an infinite number of badly worded t-shirts, the complete works of J.K. Rowling would eventually be produced.

Up to now I’m a bit far away from the infinite mark, but here are 3 for starters. 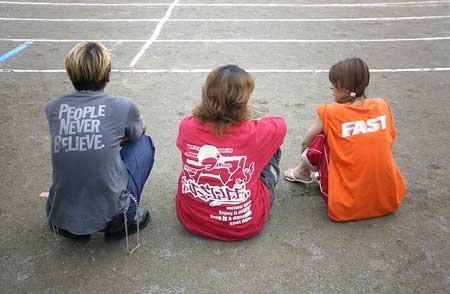