Amongst most Japanese kids, foreign celebrities are arguably just as well known (if not more so) than their homegrown counterparts. As an example, just the merest hint of the word soccer invariably produces spontaneous and excited chants of “Beckham! Beckham!”

But all these foreign (and at times difficult to pronounce) names can get a little confusing. Or so it would seem after a class I had last week.

Practicing the riveting and overly used “What/Which _____ do you like?” I asked the class what sports they enjoyed. Thankfully one young student made the effort to answer, and he managed to blurt out that he’s a keen basketball fan. Deciding to abandon all caution and forge full steam ahead, I took the plunge and asked him which player he liked as a follow-up question.

Unfortunately this was the moment when the confusion arose and everything went pear shaped. Proud of his extensive basketball and NBA knowledge, the young fella excitedly told us that his favourite player is the one and only Michael Jackson!

Needless to say, after a brief pause to take in the magnitude of his mistake, we all guffawed loudly. Just long enough to make him cry and never want to study English ever again.

Ok, that last bit is not true, but his better-informed classmates found it hard to conceal their laughter. As it has to be said did their English teacher. 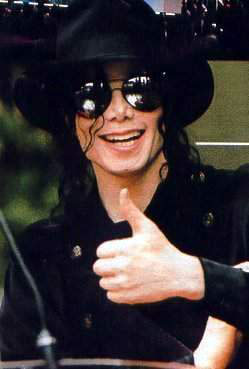 Michael “NBA” Jackson yesterday giving a big thumbs-up after wowing fans with yet another flamboyant slam-dunk.