Quite often, borrowed English words turn up in the strangest of situations, many of them far removed from their original meaning. But the reworking of bar code is a stroke of genius, as it perfectly describes what in regular English is a plain old comb-over.

Sporting the bar code in the picture below is Japan’s Health, Labour, and Welfare Minister Chikara Sakaguchi. Another in the long line of Japanese politicians to have been caught missing payments to the national pension plan. But on the ever-growing list of non-payers, Mr. Sakaguchi is among distinguished friends. As Prime Minister Koizumi, and Tokyo’s obnoxious and racist Governor Shintaro Ishihara have also been found guilty of shirking their pension responsibilities.

But Sakaguchi-san may have got rumbled for not contributing fully to the pension fund, but judging by his impressive bar code, he still feels he can fool us into thinking he’s got a full head of hair. 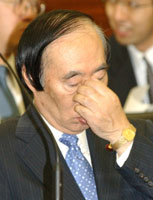 Are you going to tell him, or shall I?