With what appears to be a bid to boost the already oppressive nature of a Japanese government building, the Ministry of Health, Labour and Welfare in Tokyo has disallowed discourse in its elevators. In fact, even a wary wee whisper is considered out of line, as silence only is suggested. 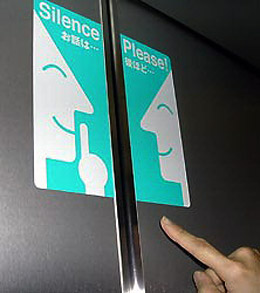 A move that has allegedly been watched with interest over at the Ministry of Culture, with rumours abound that it is all set to ban smiling and eye-contact in its building from April.