In the hotly contested most-bizarre-place-to-hold-an-interview competition, Japanese internet retailer ImageNET is currently leading the way, as yesterday the company held interviews on top of Mount Fuji.

Pretty unconventional it has to be said. Yet not content with potentially bagging a prize for the unique location of the interview, the online trader attempted to muscle in on the corniest-line-used-by-a-retailer award too, saying, â€œThe job interview was held atop Japan’s highest mountain to make sure new employees have what it takes to scale the heights of businessâ€ 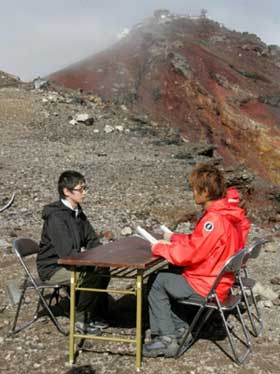 It turns out that only 11 of the 20 applicants reached the summit, and with four jobs on offer, the climb looks to have been well worth the effort for those involved. However a rumour that the young candidate pictured above was heavily penalised for being a mere 10 minutes late after his 3,776-metre slog has yet to be confirmed.