A few years ago I saw a TV programme about people who were incapable of throwing things away. And I don’t just mean stuff like old clothes, magazines, electrical stuff etc. No, I mean everything. Whether it’s an old pizza box, an empty can, or the remnants of last night’s dinner, some people it seems are simply incapable of discarding rubbish.

The show in question treated those afflicted with a mixture of sympathy and sensation. And admittedly the apartments they visited were both disgusting and fascinating at the same time. It’s difficult to explain, but literally tiny passageways had been carved out amongst the huge mass of rubbish and unused items. Likewise, little clearings were created for sleeping and eating. I dread to think what those abodes smelled like, and as a place to live they looked absolutely vile. Not to mention uncomfortable.

Now whilst not exactly Mr. Tidy, I’ve been to some houses that I would class (and I’m being kind here) as something of a mess. But compared to those homes shown on the TV, their owners could almost be described as sufferers of a compulsive cleaning disorder.

So is there a point to any of this? Well yes. Sort of. Out and about the other day I came across a house that reminded me of the aforementioned TV programme. The neighbourhood it’s situated in has an area for leaving the daily/weekly garbage literally just around the corner, but the front garden looks like this. 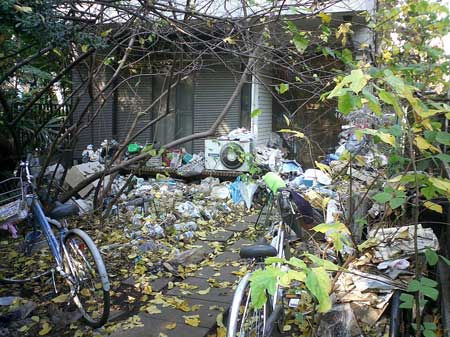 What it’s like inside is anybody’s guess, but as appalling as it probably is, for reasons unknown I’d like to have a quick look around.