After equipping his shoes with nails back in June, and fulfilling his desire to â€œinjure the legs of a woman with a good figureâ€ by repeatedly kicking a young lady in the calf muscles, Seitaro Kasai finally found himself in court yesterday.

Yet after declaring that the 32-year-old’s actions were â€œselfish and mean crimes in which the defendant gratified himself with sexual excitement from seeing women suffering”, Tokyo District Judge Yasutsune Kawada let Kasai off with a 2 1/2-year prison sentence — suspended for 5 years.

However perhaps not wanting to be regarded as a complete soft touch, Judge Kawada did order the confiscation of Seitaro-san’s shoes. Two pairs of them no less, sending out a firm message to modified footwear maniacs throughout the length and breadth of Japan. 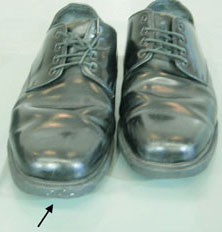