Japanese women are often reluctant to live on the ground (first) floor of an apartment building due to the supposed danger of underwear theft. In fact, so often is this alleged threat mentioned, that one can almost imagine huge packs of lingerie lovers roaming the streets in search of unattended underclothes.

Yet as absurd as that sounds, it may not be too far from the truth; however instead of gangs, the perpetrators may be lone individuals blessed with prodigious plundering capabilities — Hideki Aoki being a prime example.

The 50-year-old’s panty pinching prowess came to light on April 11, when he was busted for illegally entering a woman’s apartment in Nagoya; a heist that bagged him an incredible 67 undergarments. Yet such greed worsened his predicament, as the arresting officers decided to investigate Aoki further, and the search of a garage listed as his work place unearthed a staggering 1,700 pieces of underwear. The fruits of his labour lovingly laid out by the police and then photographed for good measure. 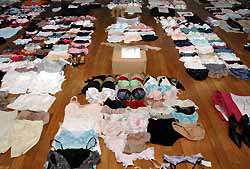 Under questioning, Aoki-san admitted to the allegations, telling the police, “I was responsible for around 250 incidents from 1990.” Later attempting to explain his behaviour — and at the same time providing an unsurpassable punchline — by adding, â€œI haven’t been able to talk to girls since I was a student, so I became interested in underwear.”