Politics rarely gets a mention on these pages, but due to intense opposition in some quarters to Prime Minister Koizumi’s postal reform drive, and an upcoming election on September 11, new political parties are springing up on an almost daily basis. In fact not only are there are a plethora of new parties, but some lawmakers are hopping from one to another like gadflies.

Upper house member Kensei Hasegawa has been instrumental in this trend, helping set up Kokumin Shinto (People’s New Party) last week, and then on Wednesday deciding to jump ship and join the even more recent New Party Nippon.

Whilst Hasegawa’s move is said to have been tactical, giving the newer party the necessary number of parliamentarians to make it legal, a few doubters have begged to differ. Some lawmakers saying the move was simply a way for Hasegawa to team up with other disco loving Diet members, enabling him to indulge publicly in his love of the Bee Gees, and in particular the movie Saturday Night Fever. A claim that the picture below of the newly formed New Nippon Party appears to confirm. Hasegawa-san on the right looking especially pleased with himself. (Apologies for the poor image quality). 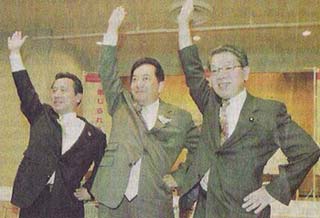 Whether this emphasis on party in the world of politics will go down well with the electorate is hard to say, but New Komeito leader Takenori Kanzaki appears to think it might be worth a few votes. The veteran politician recently caught gamely grooving in front of a crowd of young voters. 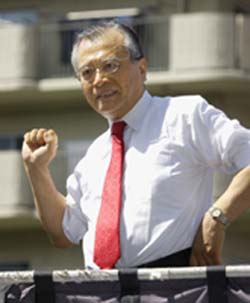 Yet try as they might, it looks like the Prime Minister will be very hard to beat, the political pro having already gone a long way in securing the groove vote. Plus along the way cannily attracting the attention of the nation’s, ahem, swing voters too. 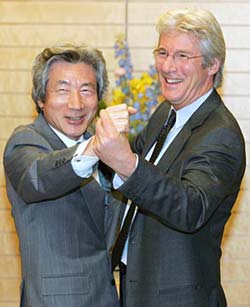