On Monday, the Kyoto District Prosecution Office filed charges against Mr. Isamu Kaneko. And seeing as he’s the man who developed Winny, the nation’s most widely used piece of file sharing software, the case could have a profound effect on how the whole file sharing issue is dealt with in Japan.

Kaneko-san released Winny for public use in April 2002, with the software designed to provide greater anonymity than that of WinMX. Which up until then had been the most popular piece of file sharing software in use.

When he was arrested last month, Kaneko (who is an assistant researcher at Tokyo University) was quite philosophical. As he commented that, â€œBasically, what I did clashes with the law, so it was almost inevitable that I was going to be arrested.â€ But now that he has been officially charged, the academic has understandably changed his stance somewhat. Both he and his lawyers are maintaining that he has no connection with users of the software, and in that sense his actions do not constitute supporting illegal file sharing. 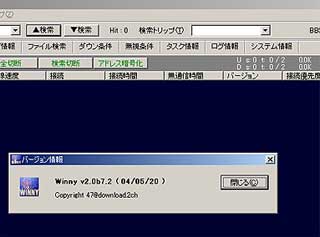 The fact however that one 19-year-old user of Winny has already been prosecuted for downloading games and films doesn’t bode well for Kaneko’s chances. And prosecutors are also claiming that Kaneko produced numerous updates for the program, despite knowing that it could be used illegally.

Yet perhaps Winny and its developer could well have steered clear of the courts but for a few incidents that occurred over the last year. In March, a virus swept through the program, and in doing so managed to pick up investigation records from a Kyoto Prefectural police officer’s computer. Eventually spreading them around the net. This isn’t the only case of such an occurrence, and as well as police records, some Self-Defense Force documents have now been seen by a much larger audience than they were originally intended for.

For such things to happen though, one has to presume that several police officers and at least one person from the Self-Defense Force had Winny installed on a machine they were using either at work, or for work. I wonder why? And what’s more, will they be prosecuted too if found guilty of downloading copyrighted material?

But like I said earlier, this case could have a huge impact on how file sharing is dealt with. And as a response, Japanese net users have already started collecting money to help Mr. Kaneko defend himself. Now that he has been officially charged, any such contributions could prove to be very helpful indeed.