Some April Fools’ Day jokes are better than others. So we can all imagine the collective groan that greeted Ueno Zoo’s great discovery last Friday, a Tonosama (Lord) Penguin that was 165 centimetres tall. A beast that looked like nothing other than someone dressed up in a not especially convincing penguin suit.

But it turns out that real penguins are far more gullible than humans. As when their counterfeit cousin appeared, the birds present could do nothing but look up in awe and wonder at the towering Tonosama. 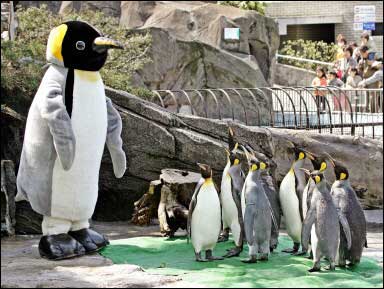 However when zoo director Teruyuki Komiya revealed himself as the penguin prankster by taking off his mask, the penguins wandered off in disappointment and disinterest.

As, presumably, did the on-looking customers.