It’s probably fair to say that a Hyogo Gubernatorial Election doesn’t usually garner much attention outside the region, and posters informing people of the event even less so. Until now that is, as due to the use of popular idol Eriko Sato, the date of the upcoming election is very well known; and the promotional posters have become much sought after commodities.

Young Sato-san you see is pictured sporting a shichisan (7-3) hairdo. A style generally favoured by middle-aged men, and one that gets its name from the position of the parting. Meaning that a centre parting could conceivably be labelled a 5-5, and a comb-over a 9-1 — although sadly they aren’t. 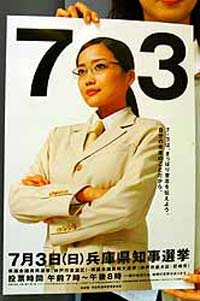 However as you can see from the poster, the shichisan is more than just a hairstyle. The numbers relate to the election date of July 3. Clever eh?

Arguably not so clever though, was the choice of Ms Sato. Her popularity has meant that the posters are being stolen at an alarming rate. Large numbers of them turning up on internet auction sites and selling for around 1,000 yen (5 pound) each. A situation that prompted one official with an unidentified haircut to say, â€œIt’s not appropriate for them to be sold.â€

Yet when all is said and done, the 7-3 isn’t the most flattering of hairstyles — regardless of how pretty young Sato is. Especially when you consider what could have been on the posters. 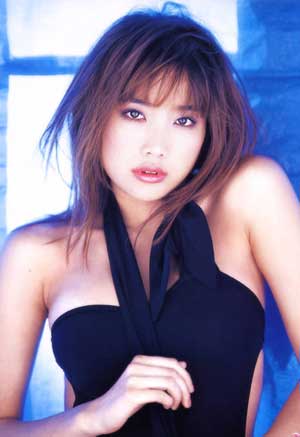