Presumably there isn’t a prize for the greatest themed bra manufacturer in the world, but Triumph International would be hard to be beat if there was. And perhaps to prove this point, the lingerie maker has produced another winner with the ‘Post Privatization Total Surprise Bra!’. 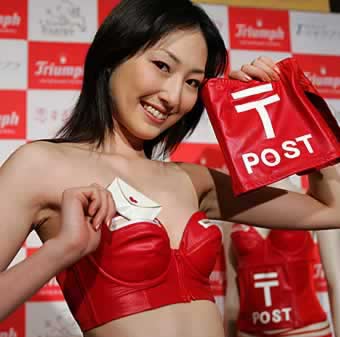 What the total surprise is I don’t know, but the decision to make a bra supporting Prime Minister koizumi’s push to privatize Japan Post must have raised a few eyebrows to say the least.

The merits of the proposed privatization are very debatable, especially as the incorporated Postal Savings is one of the largest financial institutions in the world, with deposits in excess of 200 trillion yen; however, the use of scantily clad young ladies in promotional campaigns will no doubt go a long way in alleviating the nation’s fears.

Personally speaking, the post box themed underwear has won me over. So much so in fact that I could say it has given me the urge to go and make a deposit of my own. But I won’t, as it could be construed as being crude.