A man was arrested in Kobe earlier this week after being caught stealing 2 pairs of trousers from a railway office. However 39-year-old Kenji Hishida wasn’t exactly what you’d call desperately in need of any leg wear, especially not of the railway uniform variety.

Mr. Hishida it turns out is obsessed with trains and planes, and an integral part of his hobby it would seem is stealing uniforms. After his arrest, the trouser thief admitted to stealing clothing from railway and airline companies over a 15-year period. Claiming that by wearing the stolen uniforms he could enter railway facilities, where he was “able to get a close look at trains from close range.”

Perhaps not surprisingly Hishida-san is unemployed, as after what the police found at his home it is obvious that he had no time for something so distracting as work. In his (presumably quite large) apartment, a staggering 10,000 uniforms were recovered. Prompting one surprised officer to claim that it was a haul “even a 2 ton truck could not carry.” 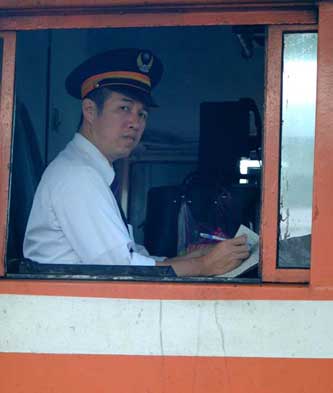 A disgruntled looking Hishida-san on his way to court yesterday. Perhaps.