In Japan, all shrines, temples, and sacred sites have a box for visitors to make monetary offerings. From my occasional observations, most people seem to drop a low denominational coin in before praying. And from a few sneaky peeks into the dark depths of various offertory boxes, there is sometimes the odd note in there too, but usually not many.

However to research this fully, I should have visited Usuki, in Oita prefecture. As on April 14th, a total of 920,000 Yen was collected in 2 offertory boxes at the sacred Buddhist site pictured below. 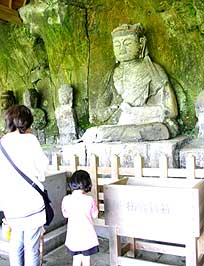 Shocked officials said that daily offerings were generally somewhere between 10,000 and 30,000 Yen, and were made up of mostly coins, with only the occasional note being found. So the amount on the 14th took everybody by surprise. Masato Fujimaru from the city’s tourist office said, â€œThis scale of offering is unprecedented. I guess someone who had his prayers answered offered the money out of gratitude.â€

Whatever those prayers were, all I can say is that they must have been asking for something pretty substantial. 920,000 Yen is almost 5,000 Pounds!

Now whilst slightly different, this story reminded me of a temple I went to in Kamakura. It was built in a small cave that had a tiny stream running through it. And unbeknownst to me before I went in, it is unique in that it’s considered good luck to wash your money in the running water. Doing this and saying a few prayers is said to bless you with an unexpected financial windfall. Although sadly there were no details as to how much money you could hope to expect.

So before you could say gullible, I was down on my hands and knees next to the stream, frantically scrubbing the few coins I had with me. But glancing to my left, I soon realized that I was merely an amateur (or alternatively not desperate enough), as beside me was a middle-aged man carefully washing a substantial wad of notes. There were no measly coins for this fella. And judging from his expression, he wasn’t just doing it for a bit of fun. He was deadly serious, and looked like he really needed that extra money. I just hope he had a bit more luck than I did, as my promised windfall has yet to materialize.