Although details of the trip are often hard to come by, the current Queen Elizabeth spent a summer in Japan during her youth; a month or so of freedom and exploration before the responsibilities of royalty took over the young woman’s life.

Even less well documented however is that during this period away, the heir to the British throne remarkably joined forces with a humble sign writer, helping him to produce bilingual notices for foreign visitors and dignitaries. The precocious princess somehow managing to struggle along with only her trusty dictionary and an army of aides and lackeys.

Yet despite this effort at mixing with commoners — and indeed Johnny Foreigner — young Elizabeth it seems never quite managed to escape her upbringing. This badly faded and only remaining example of her work hinting at the princess’ elevated position. 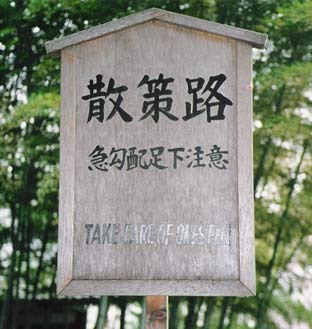 A straight forward ‘Be careful’ or ‘Watch your step’ obviously sounding rather crass to her delicate and finely tuned royal ears. ‘Take care of one’s feet’ instead coming across as an infinitely more refined option.

Still, such slightly over the top politeness is nothing to the now veteran Head of State’s last effort at translation. Her rather long-winded, ‘If you’d be a jolly good sport and steer clear of the lawn we’d needless to say appreciate it enormously’* sadly opening something of a rift between the princess and the sign writer, resulting in the premature demise of a unique relationship.

*Amazingly this final collaboration could still be seen in Tokyo until just over a decade ago, but unfortunately it disappeared along with the capital’s last piece of grass in 1995.