Perhaps not entirely grasping the concept of escapism, Bandai, creator of the hugely successful Tamagotchi, is set to release Ant’s Life Studio in November — a virtual ant farm that requires its ‘owner’ to build nests, feed the queen and avoid getting eaten by hungry spiders. 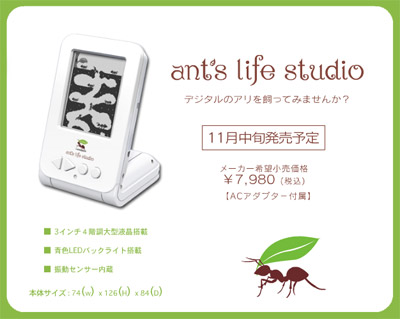 The insects humdrum existence and work orientated lifestyle however is being aimed at Japan’s masses of stressed out salary men, a group whose equally humdrum office existence and company focused life appears to disturbingly mirror those of ants — virtual or real.

Not that Bandai seems deterred by such similarities, with a spokeswoman for the toy maker optimistically claiming, “Stressed-out employees can keep it on their work desks and be comforted just by watching the ants work. By watching them work, they can take their minds off their own work for a while.”

On the plus side though, Ant’s Life Studio does allow the building of up to 100 different nests, adding an element of choice and freedom more than likely devoid from the lives of the game’s targeted audience of desk—chained dependants.