Whilst Christmas isn’t really a part of the traditional calendar here, that hasn’t stopped many people (and practically all retailers) embracing the festive spirit with as much enthusiasm as they can muster. Unfortunately rumour has it that at times this eagerness has been a little misdirected.

Now sadly this story has to remain classed as an urban myth, as it seems no photographic evidence is available. And I’ve checked extensively. Well, on Google images. What more do you want?

Anyway, back to the story/myth. The year varies depending upon which version you hear. Some have it as far back as just after the Second World War, others some time in the 1960’s. Whereas a few younger believers place the sighting as recent as the 1990’s. The location too is equally troublesome. Sometimes it’s as vague as Tokyo, Osaka, or even simply Japan. Ginza gets mentioned more than most though, so perhaps that’s the safest bet.

Sadly, as fuzzy as the various accounts are, none of them point to the Santa in question being this particular bearded man. 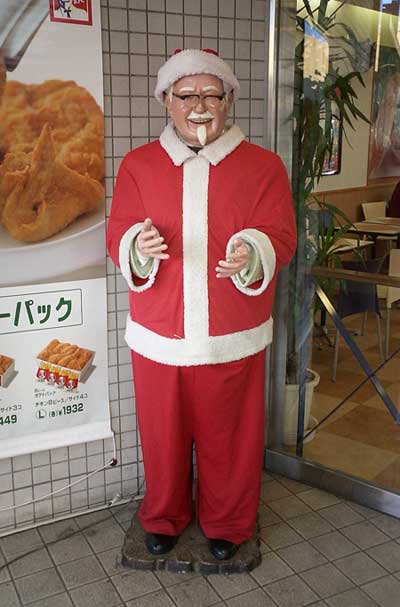