After sustaining substantial losses due to the earthquake in Niigata last October, electronics giant Sanyo has hit upon a novel way to claw back some money. As on Saturday the company asked its domestic employees to go on Sanyo spending sprees.

Perhaps if minor purchases had been proposed, this announcement wouldn’t have made the news, but the figures suggested simply beggar belief. Division chiefs have been asked to buy up to 500,000 yen (2,500 pound) worth of products, and regular rank-and-file workers up to 200,000 yen (1,000 pound).

A spokesperson said that if every employee met the company’s specified target, sales would be boosted by about 16 billion yen. And in an act of selfless generosity by Sanyo, it has been said that workers will be allowed to include purchases by relatives and acquaintances in their money-spent-under-duress totals.

That said, perhaps they’ll all be happy to rush out and spend their hard earned cash on Sanyo Winnie the Pooh toasters. 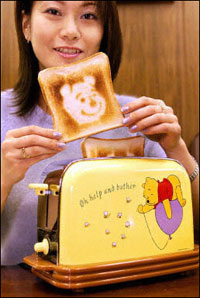 Or there again, perhaps not.