Whilst not exactly a pastime as such, panty pilfering isn’t especially uncommon in Japan, with finds of unfeasibly large amounts of underwear regularly making the news. Yet whereas most perpetrators practice their art with the utmost care, Junichi Uchikura threw caution to the wind by entering a policeman’s property to bag some of his wife’s briefs.

A bold move in itself — especially as the officer was off duty and at home — but one made more audacious by Uchikura-san’s outfit, as when he was caught, the 24-year-old was sporting a Japanese schoolgirl sailor suit uniform. An item he apparently acquired during an earlier escapade.

Sadly no photograph has been released, but Uchikura may (or indeed may not) have looked something like this. 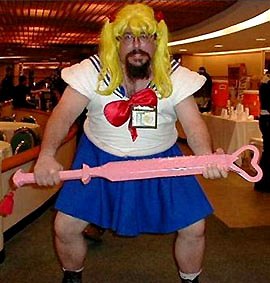 Minus the beard perhaps.