Growing up in Britain I was always aware of the potential for terrorist attacks, and thought nothing of seeing rubbish bins at train stations covered, or more often than not completely removed.

But one thing that has always struck me about Japan is its sense of innocence. And I don’t mean that in a bad way. People carefreely leave their bags on chairs in restaurants, and the stations are always spotless due to the large number of rubbish bins available.

Sadly, due to the recent threats from al-Quaeda, things are beginning to change. And from this week, train station rubbish bins have looked like this. 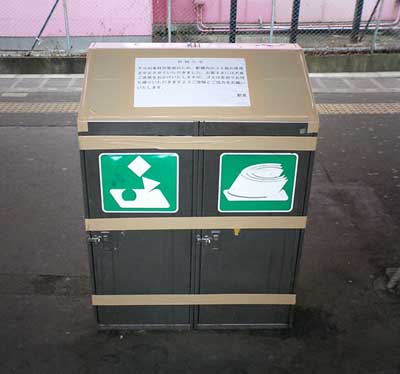 I should say however that similar measures were taken 9 years ago after Aum’s sarin gas attacks on the Tokyo underground. Although I think I’m right in saying that this was restricted to the underground system, and wasn’t implemented throughout the whole train network as I’m presuming it is now.