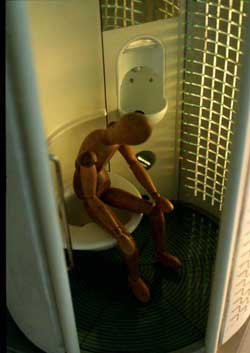 There are surveys for most things these days, so I guess Toto Corp’s investigation into the toilet habits of men should come as no surprise. And in its peeing poll, the nation’s largest toilet manufacturer discovered that 23.7% of Japanese men sit down to urinate.

Reasons for the increase in sitters (up from about 14% three years ago) are said to be varied, but most of them seem to centre around cleaning, and the poor aim of many men.

An unnamed and newly married 24-year-old company employee who was interviewed fell into the latter category. A recently converted sitter, he went on the record saying, â€œIt’s my job to clean the toilet and I used to find my aim wasn’t too good, Once I’d gotten used to sitting, I learned to relaxâ€

Toilet researcher (yes, you read that right) Junichi Hirata has a different take on the burgeoning trend. After presumably extensive research, the men’s room master blames the increase on the spread of Western toilets. Hirata-san highlighted the decision in the 1960’s to move away from Japanese toilets as being the turning point, leading to a massive decrease in numbers. And eventually to the position we find ourselves in today, with the Western-style toilet being considered the norm. 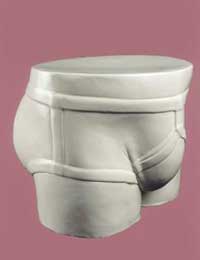 But the trend for sitting could bring about other changes, and not just cleaner bowls and drier floors. Urinal sales are said to be plummeting, with figures down 60,000 from four years ago. And even underwear designers are taking note. The opening at the front of men’s underwear is quickly becoming superfluous, with catalogue clothing seller Cecile Co. having less than half of their stock offering such access. A presumably straight-faced company spokesman was quoted as saying, “With so many guys in their teens or 20s sitting down every time they use the toilet, the demand for briefs with openings just isn’t there anymore.”

This trend has ruffled a few feathers though. Chiba Institute of Technology Associate Prof. Yoshiyuki Ueno (who has studied toilets for an astonishing 3 decades) is not at all happy about it. The professor immediately went on the offensive, forcefully proclaiming that, â€œMen are structurally designed to piss standing up.â€ And if this wasn’t enough, he went on to say, â€œI wouldn’t recommend anybody sitting down on a Western-style toilet to urinate. I advocate bringing back household urinals and solving problems regarding cleanliness by getting guys to be responsible for cleaning up.”

So there you go.