Coming from Britain, I’m still surprised by Japan’s somewhat liberal approach to tobacco. Unlike my home country, cigarettes aren’t outrageously priced, and they are readily available everywhere. Even in bars they are the same price as those bought from a shop. Not like the ridiculously overpriced vending machines found in British pubs

Also, the packets don’t contain graphic warnings about smoking giving you a vast array of unpleasant diseases. The warnings in Japan (if indeed you could class them as warnings) suggest that you try not to smoke too much. And if you can, try and put the cigarette out before you get right to the end. But more significant than any of this, is the observation of smoking manner.

Japan Tobacco’s recent campaign is a perfect example of the approach to smoking in this country. There’s clearly no need to do anything as drastic as giving-up. Heaven forbid. Rather, just brush up on your smoking manners and you’ll be fine. And perhaps most important of all, smile! 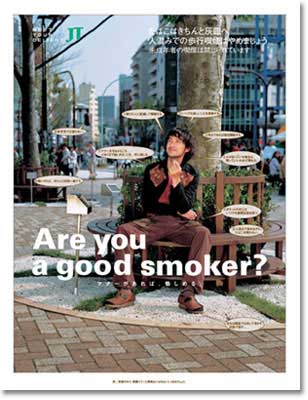 With such a lax attitude, anybody would think that the government has connections with the tobacco industry.