While Japanese mobile phone operator Softbank has recently been in the headlines over the hullabaloo surrounding the allegedly large sums of money paid to Cameron Diaz and Brad Pitt for their work in the company’s current ad campaign, its affiliate Softbank Players has, after much speculation, taken the much less media friendly option of bailing out debt-ridden sport Banei horse racing. 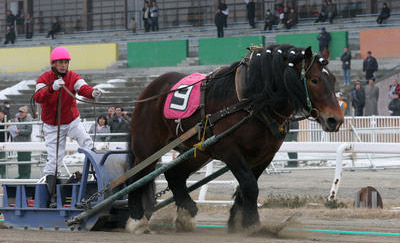 A peculiar pastime that, for those who don’t follow the sport, involves huge horses pulling even heavier weights up a track that is seemingly designed to slow proceedings down even further.

The racecourses Banei-Keiba are 200-meter-long straight separate courses with two humps in the middle. The whole course is covered with over 30-centimeter deep sand, and horses starting from the starting gate clear the 1-meter high first hump and next fight over the 1.5-meter high second hump. Steel sleighs pulled by the horses are loaded with weights, and horses compete with each other by pulling the over 500-kilogram sleighs.

There again, with the right marketing, Banei does have the potential to be popular with those suffering from heart problems or sleeping disorders — its preposterously ponderous pace and complete lack of excitement possibly making it more effective than beta-blockers or sleeping pills. The 4-minute video below offering a suitably soporific sample.

Arguably the only brief moment of interest — which mercifully happens early on — is the mention of the unusually named horse, Super Clinton. A clip of which, if you are really that interested, can be seen here.

Finally, for those who have watched the video in its entirety, driving or operating heavy machinery is not advisable until you have fully recovered your senses.