Despite a few language problems, the recent meeting between Tony Blair and Shinzo Abe saw the British leader blatantly attempt to persuade his Japanese counterpart to adopt a more central, even left-wing approach. Blair’s bold and easy to understand gesture of a move to the left however was immediately countered by Abe’s forceful and uncompromising thrust to the right. 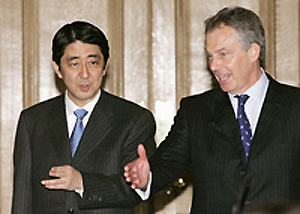 An approach that won’t have surprised Japan’s neighbours, although the Japanese PM’s unexpected Star Trek-like finger formation has caused more than a little concern, with many analysts believing it represents Abe’s goal to boldly go where no leader has gone before and revise the country’s pacifist constitution.

A voyage into the unknown, and one that if not completed by Abe himself, could well be continued by the next generationâ€¦