…The harder they (don’t necessarily) fall.

Or at least that’s what 34-year-old Takaho Ono found out last Sunday afternoon. As for undisclosed reasons, Ono-san was feeling frustrated, and in his own words “wanted to hit somebody.”

Now I’m no expert on fighting, but I do know that if you are going to pick on somebody for a bit of rough and tumble, better to choose an individual on the small side. And personally speaking, preferably a man wearing glasses, verging on the decrepit, and not a fast runner in case everything goes pear-shaped and I have to make a dash for it.

But none of this was a consideration for the brave (and foolish) Mr. Ono. Perhaps not realizing a sumo tournament was in town (but surely capable of seeing the size of his potential foe), the frustrated fighter chose to hit ex-wrestler and sumo stable master Katsunoura. A man who fought under the name Kitakachidoki, and whose records show he was 183 centimetres tall, and weighed in at an impressive 158 kilogrammes.

This mismatched battle resulted in Ono getting in one surprise punch before Katsunoura subdued him on the spot and promptly handed him over to the police. 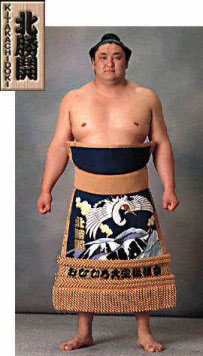 Are you laughing at my skirt?