Japan’s World Cup 2006 campaign kicks-off tonight with a potentially tricky game against the mighty Oman. Ok, I might be being a little sarcastic, but with the legendary Zico in charge, every game is fraught with danger. Sadly the old cliche of a great player not making a great coach rings very true for the dour Brazilian.

No doubt tonight’s game will be sold-out, with the fans as supportive and vociferous as ever. But one thing I can never understand is how this passion is seemingly turned on and off. On a day the national team plays, the game is talked about and people strut around in their replica shirts. Yet the rest of the time it’s sometimes hard to believe Japan actually has a national team. I don’t get it.

Although that’s not to say that Japan doesn’t have a core of die hard footie fanatics. Just take a look at this fan during the 2002 World Cup. 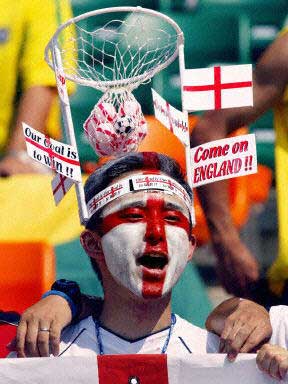 Ok, he looks incredibly silly, but you can’t say he’s not passionate. The only problem is he’s supporting England, and not Japan.