Japan it has to be said is not averse to borrowing things from other countries and then changing them; more often than not for the better. Take Tokyo’s train system for example, as after bringing in British engineers to design the original network, they have developed it into a system envied throughout the world. A far cry indeed from what now constitutes a train ‘service’ in the original engineers’ homeland.

Similarly, horse racing is another thing that has been enthusiastically borrowed from Britain, and whilst many of the traditions have remained intact, they have also been adjusted to suit Japan. Like dressing up for instance. As whilst fancy hats are de rigeur at Royal Ascot, frilly dresses are deemed more desirable in Japan.

At least for the more adventurous. 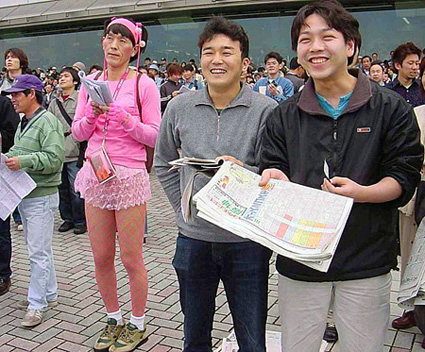