The much maligned Japanese salary man is an easy target for quips concerning corporate drones and company devotion, a stereotype that Tokyo Times has admittedly not shied away from. Yet whilst such views due contain a considerable dollop of truth, there are exceptions to the rule: like Tetsuro Tanaka for example. 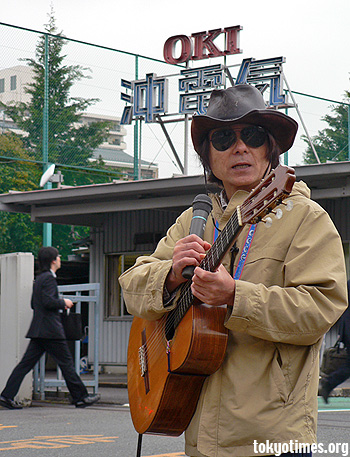 Having settled down on the salary man express after graduating from University, Tanaka-san’s life was turned upside down when he was fired on June 29 1980. A decision he has been fighting ever since, his daily protest songs and speeches outside the company gates each morning making him a local celebrity of sorts. Or perhaps even a figure of fun in a country that still cherishes conformity over everything else.

Whatever the weather he can be found outside the Oki Electric Industry Co., Ltd.’s main gate in Takao, western Tokyo, serenely strumming away on his guitar. Interspersing the songs with speeches about his plight. A struggle that saw him go all the way to the Supreme Court. A case, that perhaps not surprisingly, he lost.

Unsettled by huge job cuts in the late 1970s, Tanaka was further upset by the introduction of ‘loyalty tests’ during the same period. But as there was nobody to turn to, due to a company affiliated union and carefully selected ‘representatives’, he ended up doing the unthinkable — running for election. A decision that forced his friends to either back him and face the full force of the company, or turn their backs and toe the line. And in corporate and consensus driven Japan, what else could they do? 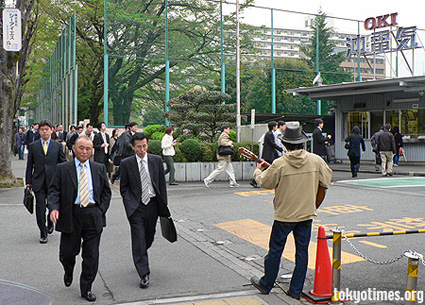 Undeterred, Tanaka continued to campaign for a position within the union, but as it was company controlled he was never going to win, whether the election was fair or not. His resultant loss was further added to by a transfer order, which if accepted would have seen him contend with a two-hour commute to work. An option that for a man with a couple of young children, was far from ideal to say the least. His resultant refusal to accept the order gave Oki the apparent ammunition they needed to terminate its troublesome employees contract.

As time has gone by, the cameras that once watched him perform every morning – and perhaps more importantly record those who dared speak to him – have now disappeared, and workers scuttle past without a glance. The only people willing to stop and say hello being young children from the nearby elementary school. 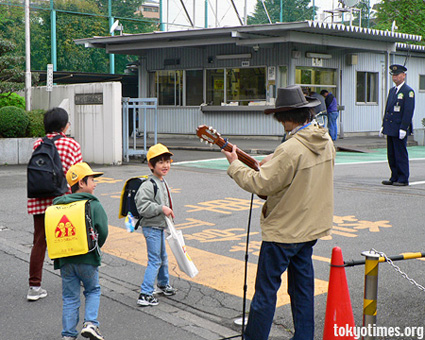 Yet Tanaka-san remains steadfast, and his struggle has seen him make speeches both in Japan and abroad, as well as numerous appearances in newspapers and magazines — the latest interest coming from an Australian crew intent on making a film documenting his struggle. And after watching and speaking to the man, I had to ask whether he ever regretted his decision to fight the company — and indirectly — corporate Japan. A question which prompted a contented smile and a wholehearted, â€œNo, not once.â€